January 25th is deemed National Florida Day, a day to recognize the 27th state to join the United States. Florida and Floridians have plenty to be proud of and remain one of the most proud state citizens. The residents of the sunshine state thrive on tourism, history and their beautiful nature. So, what better way to celebrate National Florida Day than by partaking in some of the great features of the state and representing it with some Flo Grown merchandise sold by Gear Up?

Florida did not officially become a state until March 3rd, 1845. Until that time they were officially an organized incorporated territory after the US Military forced the Spanish to cede. Florida's history dates even further back though, with the oldest city in the United States being established there. St. Augustine was founded in 1565 and is recognized as the oldest continuously occupied settlement of European and African American origin. The Spanish successfully occupied St. Augustine nearly fifty years before either Jamestown or Plymouth Rock were colonized.

Florida is a state that's economy thrives on tourism. From their popular amusement parks to their intriguing space program. Being home to Disney World and Universal Studios helps bring in tourists from all over the world. When you add in NASA and the space program, Florida is a must visit place on nearly everyone's bucket lists. With the additions of Space X and Blue Origin, people from all over enjoy the sights of watching rockets launch from Titusville and other Space Coast cities. In addition, major cities like Miami and Tampa also have a beautiful charm that attracts visitors.

The other major tourism pull to Florida is the beautiful nature offered. Although, Florida is primarily flat, it offers beautiful natural landmarks all over. Florida is probably most well known for their beaches, from tourist and surfer successful beaches like Cocoa Beach to the all natural Playalinda beach accessible from Titusville. You are guaranteed to find a beautiful beach to meet your needs. Beyond beaches, springs, fishing and wildlife are also a major pull. The all neutral springs are a beautiful sight to take in for locals and tourists alike. The Everglades National Park is 1 of 3 National Parks that Florida has to offer and grantees the spotting of alligators. Lastly, activities like fishing and hunting is also something locals enjoy immensely.

Gear Up Surplus is on of the largest online military surplus stores, a tactical gear store and a survival supply outfit. In addition to our three main focuses, we stock a variety of inventory, including Florida pride merchandise. From Florida state flags and patches to Flo Grown hats, NASA Shirts and even Space Force decals! When it comes to finding quality Florida merchandise, Gear Up Surplus is your most trusted source, with fast and easy shipping.

Being based in Central Florida and owned and operated by a Floridian, Gear Up Surplus honors it's home state in many ways. One of these ways is seen on the outside with the beautiful mural that pays homage to the home state as well as military and first responders. On this mural you can spot rockets as well as an alligator in a space suit, tying together both space and it's nature. The big words of "Welcome to the Space Coast" gives tourists a great way to document their visit to Titusville, FL. 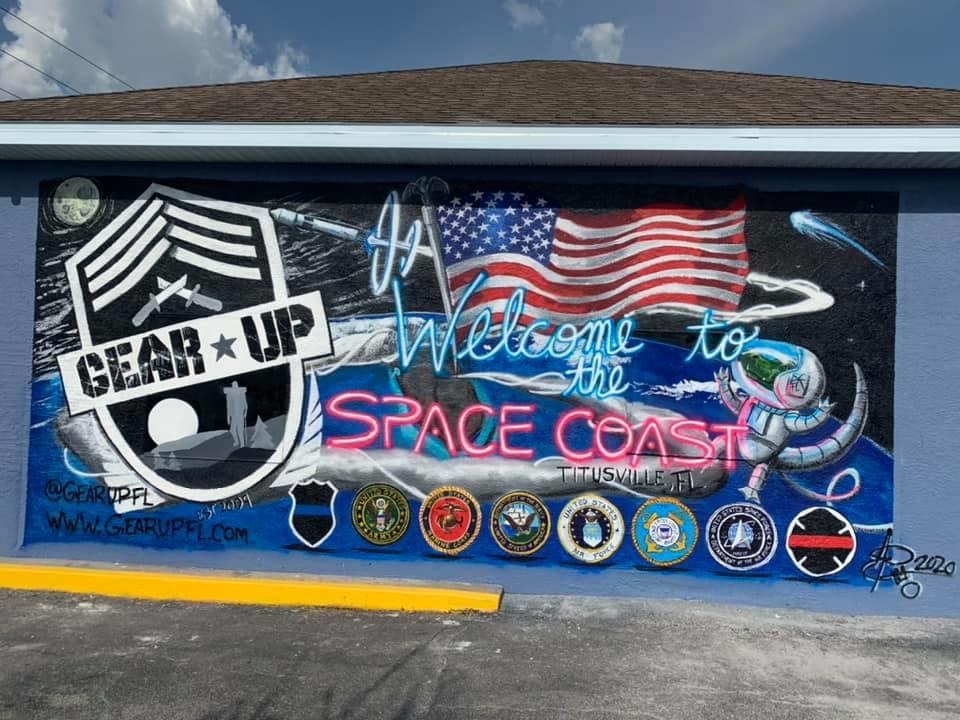 In addition to our mural, we proudly carry FloGrown (a Florida Pride company) merchandise and plenty of NASA and Space Force hats, shirts, patches and flags! For all the tourists, welcome to Florida, we hope you enjoy your visit here and shop local and shop small while visiting. For all of my fellow locals, Happy Florida Day!